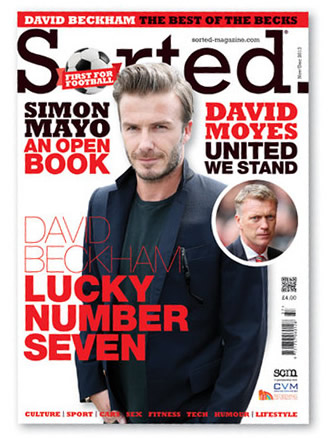 The November-December edition of Sorted Magazine is available to buy now.

Have you ever thought, ‘Why the cross?’ ‘Why not some other way?’ ‘After all God being God, can do what he wants.’ ‘Why bother with death and all that?’ You wouldn’t be alone in thinking about these questions, many have.

Had To? Chose To.

One of the most well known Bible verses starts this way, “For God so loved the world that he gave his only son…” (John 3:16).

Love is a choice; it has to be. Coerced love is no love at all. You could spend years of your life studying robotics and then create the perfect machine to meet your every need, but you wouldn’t have created something to love you, rather it would exist to merely serve you.

Other religions – not to mention a few cults – detest the idea of God dying. The idea of the most holy God suffering and dying as a human is repulsive to them because it brings shame on their God. God would have to be less than God if he suffered a human death.

Yes, I would agree, if God were not a God of love. But what greater act of love could someone perform than willingly exchanging their life for yours? If love were of immense value, surely the greatest person (God) would be capable of the greatest act of it?

To Pay The Price

The problem of sin runs deep. The Bible speaks of Jesus coming to earth and dying to pay the price for our sins and offer us forgiveness. But why, it may be asked, did not God just ‘click his fingers’ and be done with sin?

Richard Dawkins asks it this way, ‘If God wanted to forgive our sins, why not just forgive them, without having himself tortured and executed in payment?’

Seems like an easy out, but it would cheapen the character of God to someone not worthy of worship.

The things that are most valuable are the things that people steal from (like the recent  $137million Cannes diamond theft – it was diamonds, not sand, that was taken). The perfect love of God is of immense value, and when it is stolen from – through sin – the cost incurred is immensely high.

When people are found guilty of a crime we hold them personally responsible for the cost.  When my computer was stolen after a break-in to my house, the thief who was caught later that night was ordered by the court to pay me in full. His crime brought a punishment that he had to pay.

I chose to forgive him for breaking into my house whilst I slept, to let that go and not hold it against him. At the same time justice was done through the courts that day. If I had chosen to forgive the thief and that court had not passed that sentence, the crime would not have been properly addressed.

Likewise, If God were to choose to just forget, and ignore the cost of our sin, our sin would be valueless, dissolving morality, and cheapening God’s love. If the French police turned around and said, “Ahh, they’re just diamonds – no big deal”, there’d be an outcry.

God’s perfection calls for sin to be dealt with and God’s patience gives us the chance, through his sacrifice, to make amends. He forgets and his death pays his price. Its is total love and total justice.

To Show Us His Love

What is the most loving thing you could conceive of? The greatest loving act imaginable?

The noted philosopher Alvin Plantinga says that the cross of Christ is the best loving act not only that has happened, but also that could ever happen.

If God exists, and is all loving, and we are in sin, then the greatest act would be to make his existence known to us, reveal that he loves us, and redeem us from sin.

In Jesus’ incarnation – coming to earth as a man – and atonement – dying to forgive us – we have the greatest possible act of love conceivable.

The evidence for the resurrection of Jesus is compelling and well-documented. There are hard things to wrap our minds around and we continue to think about them. But if Christ rose from the dead then that changes everything. What this reveals when we piece it all together is the act of a perfect, loving, just God who offers full forgiveness to all.

This article appeared in the November-December edition of Sorted Magazine.